After waiting out the bad weather in Haapsalu port, it was time to sail again.

The persons on board numbered only three for this trip, as Dave and Essemi had to leave for a coach and ferry journey back to Sweden.

When planning a cruise and the places to visit and overnight there’s lots of factors to consider. Weather, the draft of the vessel, on-shore facilities, or where to organise crew on/off and find supplies. But the most difficult is often to find out where to go in the first place; what is interesting to see, where are the fun things to explore.

We visited the tourist office in Haapsalu, and while they don’t specialise in their maritime surroundings, one of the ladies working there does some sailing, and she offered us some good tips on places. 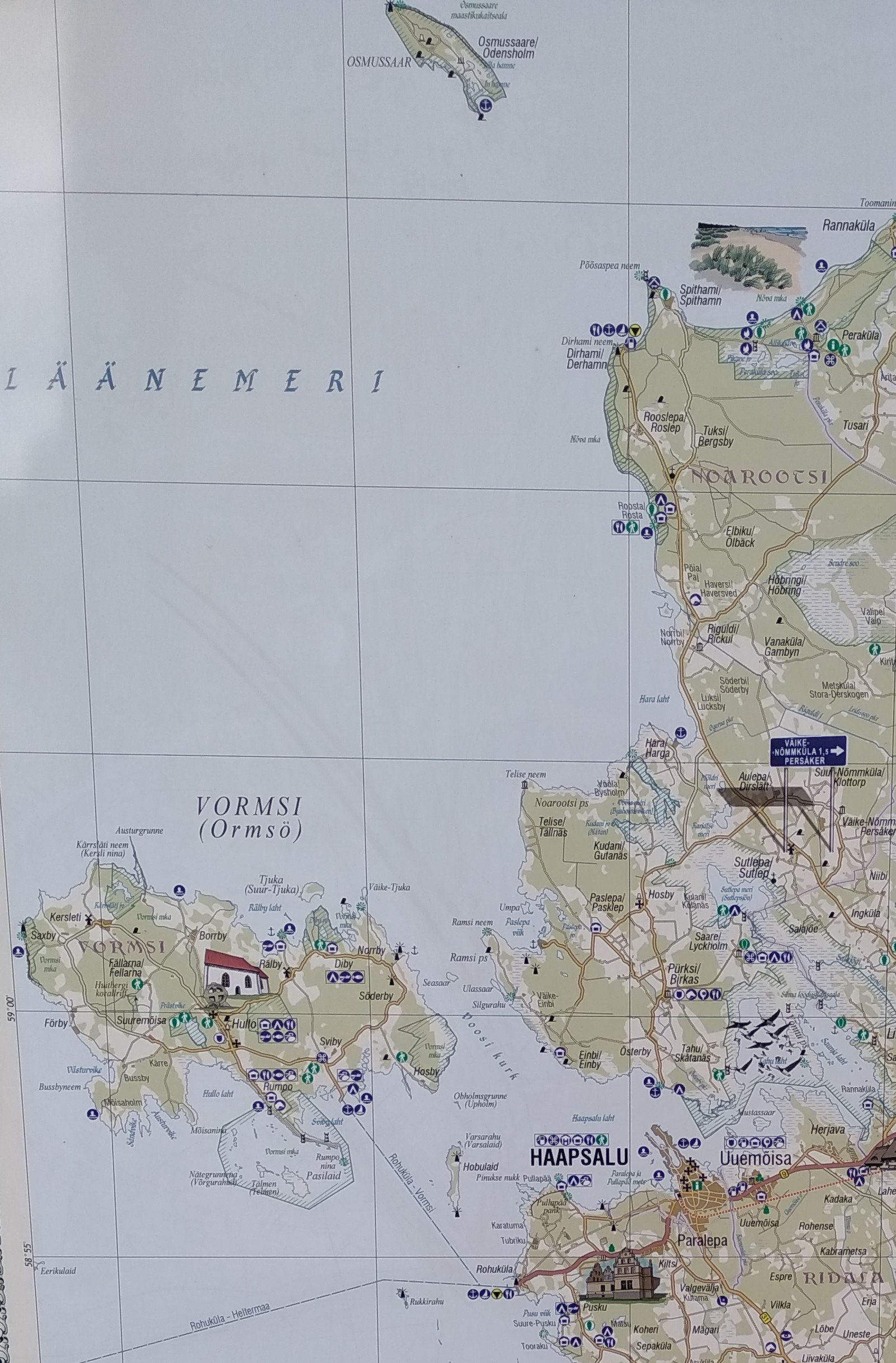 Due to only having a few days at our disposal the best plan seemed to be that we could fit two main stops. These would be the island of Osmussaar, then an overnight anchiring in Matsalu national park, and finally the island of Ruhnu before ending the week in Riga and preparing for the next leg.

Osmussaar lies at the Western end of the Gulf of Finland and for this seasons sailing it is the most Northern destination we will make.The island is shingle stone and about 4 miles long and 1.5 miles wide. It’s a good long walk around it, but possible to do in an afternoon. There’s a lot of stones, and so with the rough surface, it’s quite slow progress. 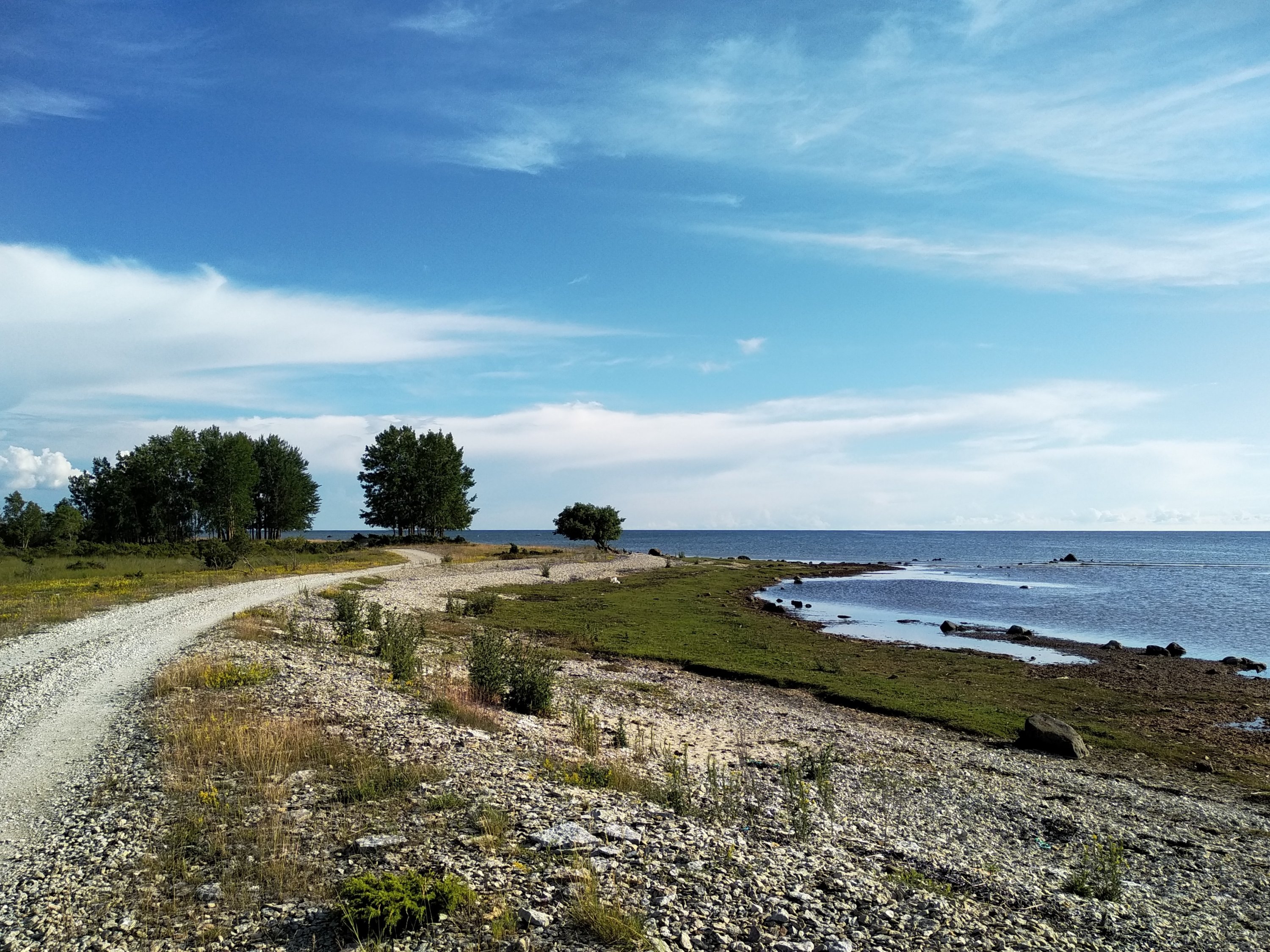 The island has a lighthouse in the North and there is a family who are caretakers and lighthouse keepers for the island. They keep a few highland cattle, and a lot of sheep.

One funny thing about the sheep of Osmussaar is that they make a whistling sound in warning to each other when we came to close. I’m not sure if that’s unusual or not, but I don’t remember hearing whistling sheep before.

The family are called the Holmberg’s and they have a dog, and also a ginger cat. The dog was very pleased to see us and stayed with us on our walk around the island for the next 4 hours. 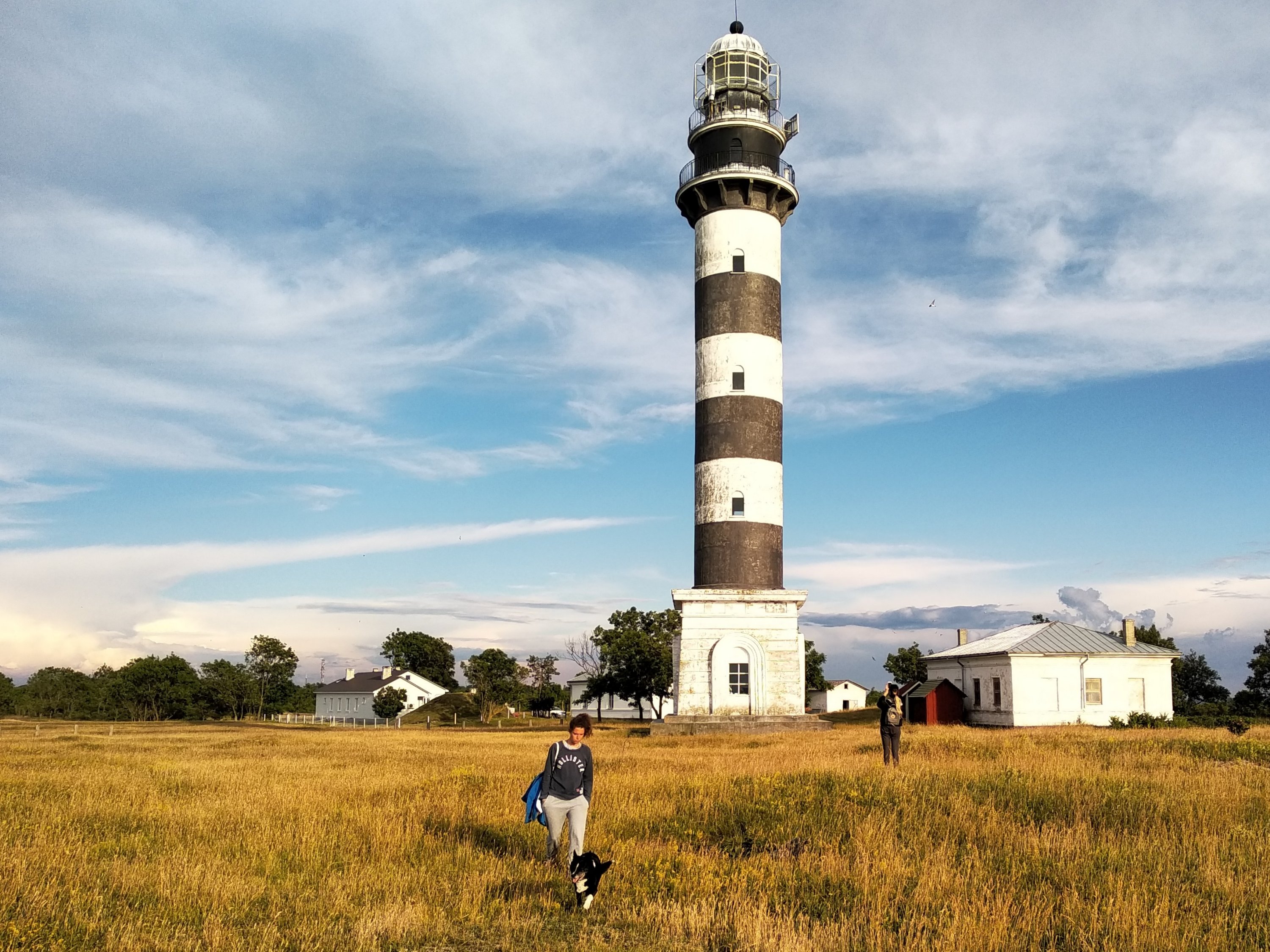 As the island is in a strategic position as guard to the Gulf of Finland there has been a large Russian presence there. They constructed heavy artillery batteries in a few places, but in 1941 abandoned the whole island after detonating explosives to neutralise the equipment.

After the Second World War the Russians were again there, and constructed a naval base on the island, which was in use until 1993.

Especially the pre-WWII era left a lot of matériel and artifacts behind. While we were there the Estonian safety services were removing live shells from the artillery batteries – ammunition abandoned and almost 80 years old.

The old bunkers and gun turrets are open to us tourists and still in remarkably good condition. It’s quite eery walking around the old bunker rooms, and peering into the corners one can see stacks of huge artillery shells waiting for someone to dissarm and remove them. The advice that was given to us was: “Don’t touch anything round and you should be safe”. 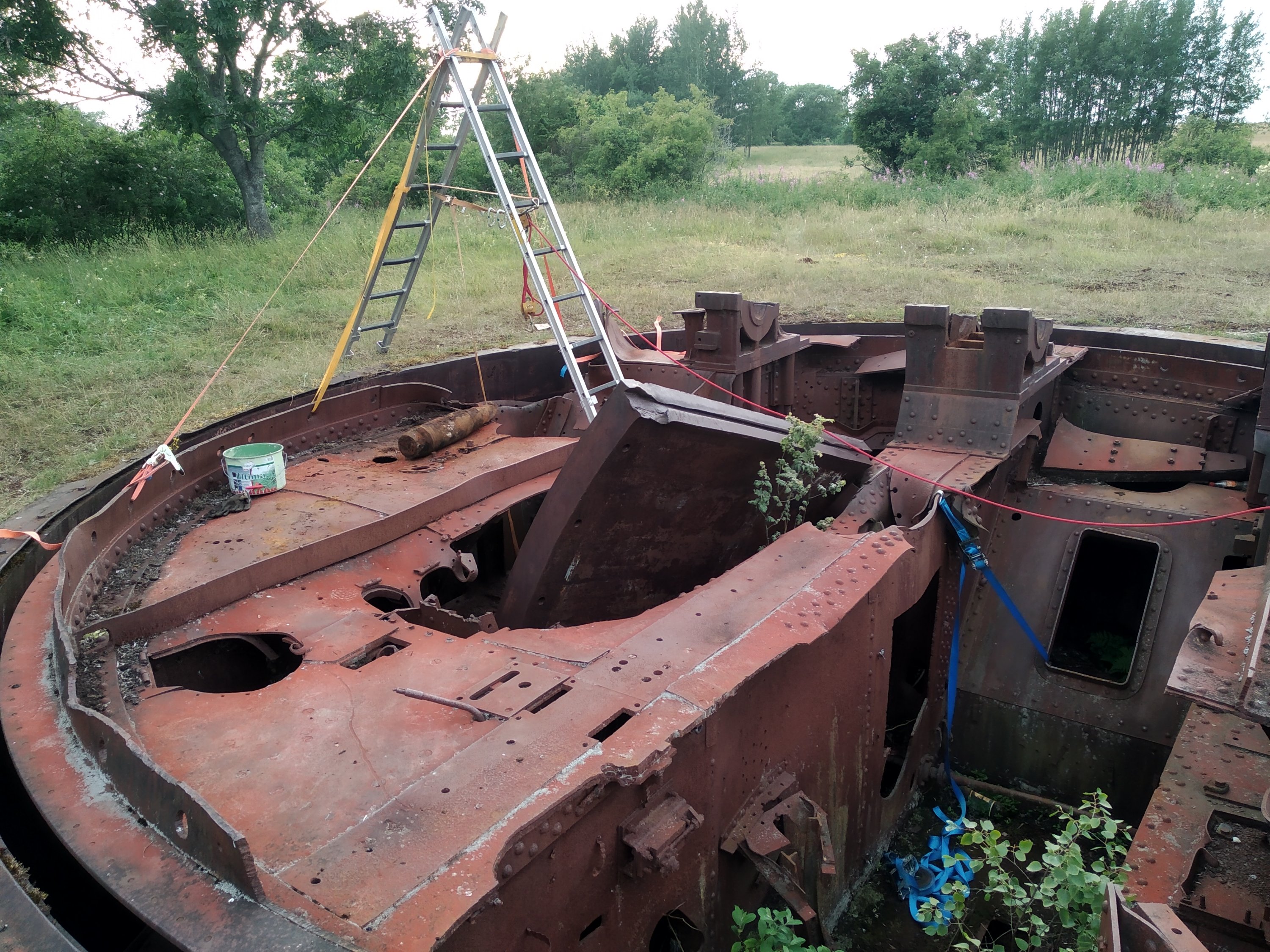 Shipwrecks and other remnants

There have been many shipwrecks on Osmussaar over the years, only one is really worth a visit to nowadays, and is situated half way up the East coast. It’s an old trawler that has broken in half and is high up on the beach. 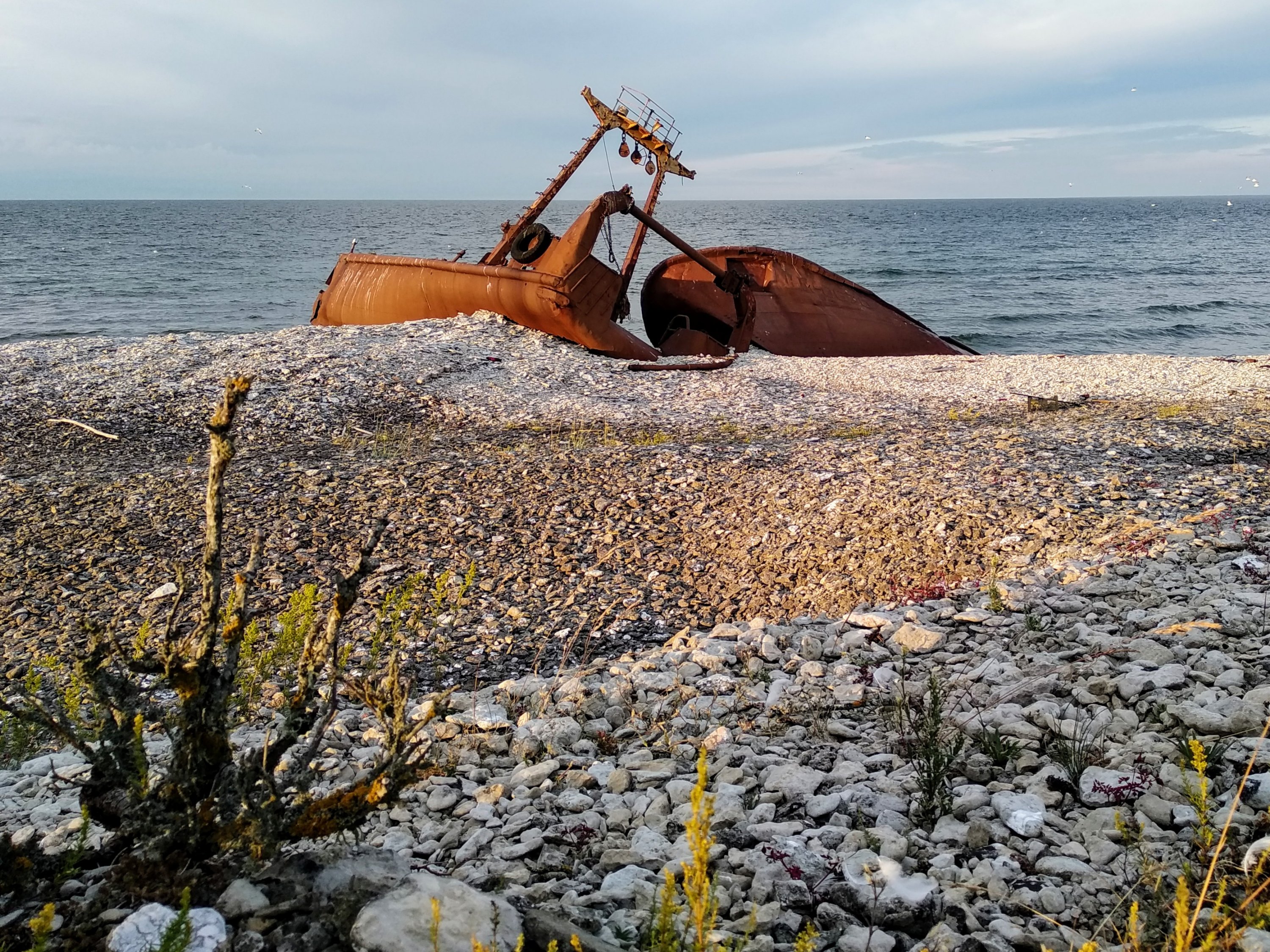 There’s lots of other old remnants of buildings, and the islands Soviet naval base. But here are also much older artifacts from the times when a farming and fishing community lived there. The original people were all shipped off to the mainland with the arrival of the Russian naval base activity and their homes destroyed apparently.

As said the harbour in Osmussaar was as far North as we made it this year. We left at midday to sail to the Matsalu national park and then onwards to Ruhnu in the Gulf of Riga.

The departure was not that easy, with a strong onshore breeze and some waves coming in the bay. The auxillary motor is definitely not up for the challenge. I keep two long poles ready on deck for pushing off the dock, or even bracing on the seabed if it’s not too deep, to assist manoeuvres.

The Island of Ruhnu

We arrived at mid-night to Ruhnu, and, as we had been told by the harbour master they were wide enough, we tried to fit the boat into one of the finger pontoon births. That proved impossible if we wanted fenders down the side, the birth was just wide enough for the vessel alone. We moved to the outer basin and alongside a bigger dock instead.

An unpleasant surprise at Ruhnu was the mosquitos! The first time this trip that there have been any troubles with mosquitos, and it was bad. In a matter of minutes the boat was full of them, and my personal kill-count before managing to fall asleep was already in the four dozen.
The next day I tried to walk to the centre of the island where its only town of 60 permanent inhabitants is – I had to abandon my attempts. The flies and mosquitos were thick in the air. Enough to make you feel a sense of panic. The locals all use bicycles, and if you keep up a good pace then the bugs can’t keep up.

The island is quite interesting though, and I would’ve liked to have seen more of it. Also it’s location in the middle of the Gulf of Riga mean it’s somewhat of a hub for all the cruising boats in the area. A yacht arrived with the Irish flag, that’s the most exotic I saw.

We left at 1AM the following morning, Friday, for our sail to Riga, to make best use of the fair winds and reaching conditions on the 60 mile trip South. 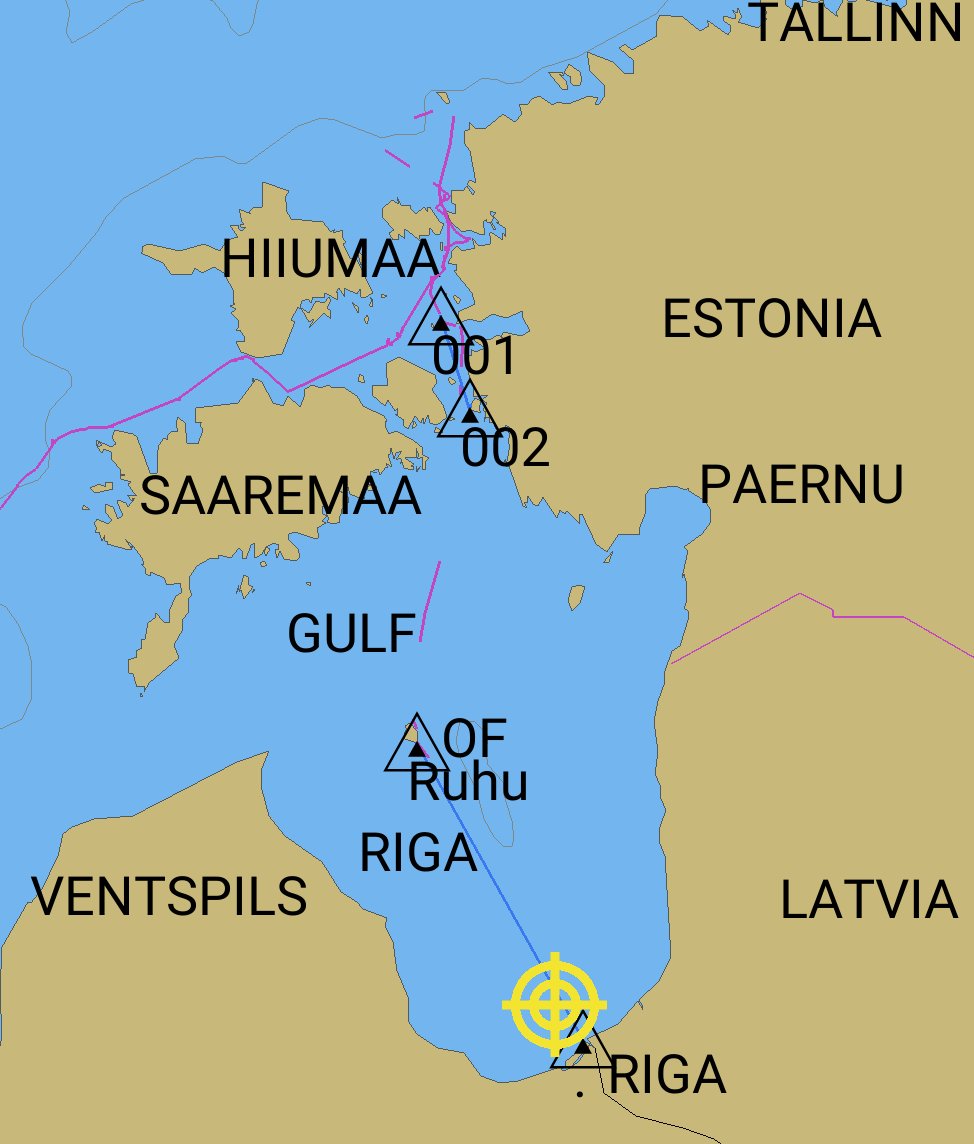